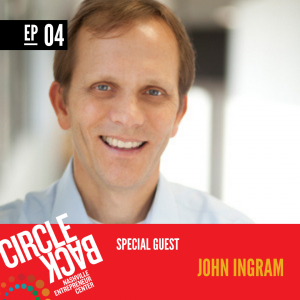 Circle Back is a podcast produced by the Nashville Entrepreneur Center where we listen to success stories from big ideas to big success. On this episode of Circle Back, we get an inside look at one of Nashville’s most successful entrepreneurs: John Ingram.

John Ingram was born into a family of great success, but was raised with both internal and external intention to work hard and become an entrepreneur of his own accord. As the second child of four, Ingram’s father gave 50% of his children’s summers to have some freedom, but the other 50% would be to work hard and build a strong work ethic. While he had the benefit of growing up with successful role model parents, Ingram created his own expectations for greatness and excelled at schooling at both Montgomery Bell academy (MBA) and Vanderbilt Business School in Nashville.

When done with schooling, Ingram worked for TN Book Company and helped digitize processes from old-school and manual to modern and computerized. Although Ingram’s father asked John to start stepping further into the book business, John Ingram wanted to keep learning before taking over the business. His interest in tech was heightened and he ventured from Nashville to San Francisco to be in a hub of tech innovation. After seeing success in tech out west, Ingram moved to Brussels, Belgium to help build a regional warehouse and transportation system to better the family company’s supply chain.

In short, Ingram describes the earlier times of shifting his operations to Europe as a “hot mess.” The Ingram company had a series of purchases of other companies for a low price, but with John’s experience on the front lines overseas, a new confidence emerged. Ingram was suggesting his father purchase a premium, quality company. “Dad. We’re paying a premium because it’s not a piece of crap like this other stuff we’ve been buying.” And with a surprisingly positive “okay,” Ingram got the logistics in Europe on track.

Initially, the plan was to stay in Europe for two years, but John wanted to extend his stay because things were going well and he had a vision for more opportunities. However, his father became ill, so he quickly moved back to the States to begin managing the family business with his siblings. Primarily co-leading with his oldest brother, Ingram worked towards a vision of bettering the supply chain process for book buying. While Jeff Bezos had a team of six building Amazon, Ingram was building a supply chain that would be the link that brought book selling to where it is today – a booming e-commerce.

Stepping into Intention – A Life with No Regrets

Today, the Ingram family company has grown to record breaking revenues of $2.5B. After his success, Ingram was invited to give a commencement speech at his former school, Montgomery Bell Academy (MBA). While he wondered what to say that had not already been said on that stage, he came across some writings of an Australian nurse listing five things that seniors regret most on their deathbed. This made an impression on Ingram and he leaned into a life of intention with no regrets.

In 2017, John Ingram launched the Nashville Soccer Club – bringing a global game to a booming city, and most importantly, creating a place where he can build amazing memories with his family.