A lesson from Mercedes Benz on Social Media

The other day,  I turned 29 and bought a new Mercedes Benz. How could my day get any better? Simple. A tweet. Yes, after buying my first car, a Tweet is what made my day. 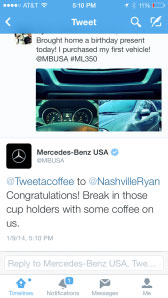 Upon returning home, I snapped a few pictures of my new ride and posted them to Facebook, Instagram, and Twitter. I mean, if you don’t do that immediately, it’s like the purchase never happened. I tagged @MBUSA in my pictures and used the hashtag #ML350. Within minutes, my tweet was favorited by Mercedes Benz on Twitter and I received a response. They used Tweet a Coffee to say thank your for my purchase! (If you haven’t used Tweet a Coffee to say thank you on Twitter, you should. It’s a genius move by Starbucks.) Not only that but they took enough time to read my bio and know I had a dog named Cooper that has an over-the-top online personality! Driving out of the lot, I was already thinking, “Yea, I could be a Benz kinda guy.” But after they responded to my tweet, I was immediately shopping for a Mercedes Benz coffee mug that I could put my Tweet A Coffee in!

Social media is a fantastic tool for listening. It’s an opportunity for any brand to hear what customers are saying and respond back in a way that reflects positively on their brand. Personally, I take to social media if I ever have any customer service issues. With most large brands that have a strong social media team, I know I can get a response back almost immediately. I once handled the return and exchange of my broken Swiffer WetJet all from using Twitter. No 1-800 numbers at all!

As a social media manager, sometimes we forgot the power of a genuine and thoughtful response. It’s the simple gestures that can take a great experience to a WOW experience. I now follow Mercedes Benz on all the social media platforms I’m most active on and will more than likely engage with a lot of their content because of this experience.

Remember to make each tweet an opportunity to tell your story and completely WOW a customer. Keep that in mind and you’ll have a huge community of life!