Big news, everyone! As one of seven Google Tech Hubs, we are excited to now welcome Google Fiber to Nashville! 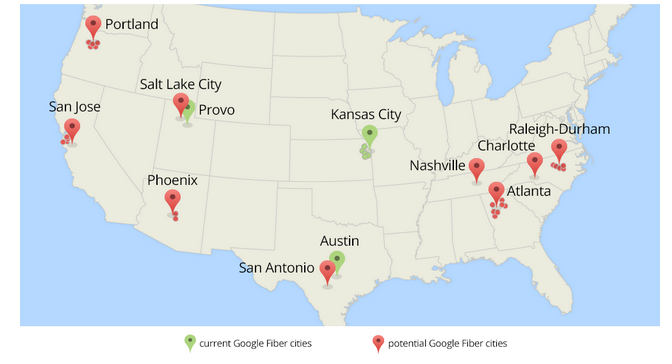 Over the last few years, gigabit Internet has moved from idea to reality, with dozens of communities (PDF) working hard to build networks with speeds 100 times faster than what most of us live with today. People are hungrier than ever for faster Internet, and as a result, cities across America are making speed a priority. Hundreds of mayors from across the U.S. have stated (PDF) that abundant high-speed Internet access is essential for sparking innovation, driving economic growth and improving education. Portland, Nashville (PDF) and dozens of others have made high-speed broadband a pillar of their economic development plans. And Julian Castro, the mayor of San Antonio, declaredin June that every school should have access to gigabit speeds by 2020.

We’ve long believed that the Internet’s next chapter will be built on gigabit speeds, so it’s fantastic to see this momentum. And now that we’ve learned a lot from our Google Fiber projects in Kansas City, Austin and Provo, we want to help build more ultra-fast networks. So we’ve invited cities in nine metro areas around the U.S.—34 cities altogether—to work with us to explore what it would take to bring them Google Fiber.

We aim to provide updates by the end of the year about which cities will be getting Google Fiber. Between now and then, we’ll work closely with each city’s leaders on a joint planning process that will not only map out a Google Fiber network in detail, but also assess what unique local challenges we might face. These are such big jobs that advance planning goes a long way toward helping us stick to schedules and minimize disruption for residents.

We’re going to work on a detailed study of local factors that could affect construction, like topography (e.g., hills, flood zones), housing density and the condition of local infrastructure. Meanwhile, cities will complete a checklist of items that will help them get ready for a project of this scale and speed. For example, they’ll provide us with maps of existing conduit, water, gas and electricity lines so that we can plan where to place fiber. They’ll also help us find ways to access existing infrastructure—like utility poles—so we don’t unnecessarily dig up streets or have to put up a new pole next to an existing one.

While we do want to bring Fiber to every one of these cities, it might not work out for everyone. But cities who go through this process with us will be more prepared for us or any provider who wants to build a fiber network. In fact, we want to give everyone a boost in their thinking about how to bring fiber to their communities; we plan to share what we learn in these 34 cities, and in the meantime you can check out some tips in a recent guest post on the Google Fiber blog by industry expert Joanne Hovis. Stay tuned for updates, and we hope this news inspires more communities across America to take steps to get to a gig.