Are you an early-stage entrepreneur with an idea, but don’t know where to start? Pre-Flight is a 4-month “pre-accelerator” program, and it’s the perfect place to start turning your dreams into reality! Registration is open now, but hurry… this program fills up quick! 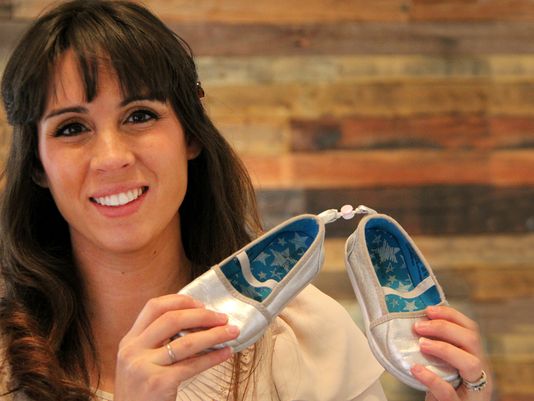 And her product will be featured on the As Seen on TV website starting next week.

For her day job as a professional artist, Llamas is preparing for an October-to-February exhibition of her art at the Nashville Parthenon; when she gets home, she plays full-time parent to a six-month-old as well as two other young children.

What persuaded her to start a business when her plate was already so full?

Actually, her busy schedule itself.

“The whole concept for this product came from the fact that I was juggling my career and small children,” she said. “It’s a solution for parents that are constantly faced with this struggle.”

Llamas didn’t intend to sell her shoe snaps at first. After using them for her own kids, she began sharing the product with friends.

“Everyone was telling me, you should sell this!” she said.

Already familiar with the Nashville Entrepreneurship Center through her career as a professional artist, Llamas applied for and won a Google scholarship for a “pre-flight” entrepreneurship class held there. She said she actually had her youngest baby while enrolled in the course. But she said  the class made it possible for her to launch her business since she had no prior knowledge or experience in the field .

Llamas truly believes in her product. “We have such a fast paced life style that it really does count,” she said.

Others agree. “ScrunchyMama” mommy blogger Angelina Rozalez wrote of Wear a Pear that she was initially skeptical, but that after trying them out, she’s a believer.

“I know I’ll get plenty of use out of them for years to come,” she wrote in a blog post in March.

In the future, Llamas said, she wants her shoe snaps to become a household product. When kids come home from a play date, they’ll know to snap their shoes together and the entire lost-shoe issue can be avoided.

To other women with product ideas who haven’t done anything yet, Llamas said go for it.

“The biggest thing is just to ask questions. People, especially in Nashville with the Entrepreneur Center, are very helpful: we encourage each other.”

Congrats to the Winners of Panel & Pitch: Consumer Goods Edition