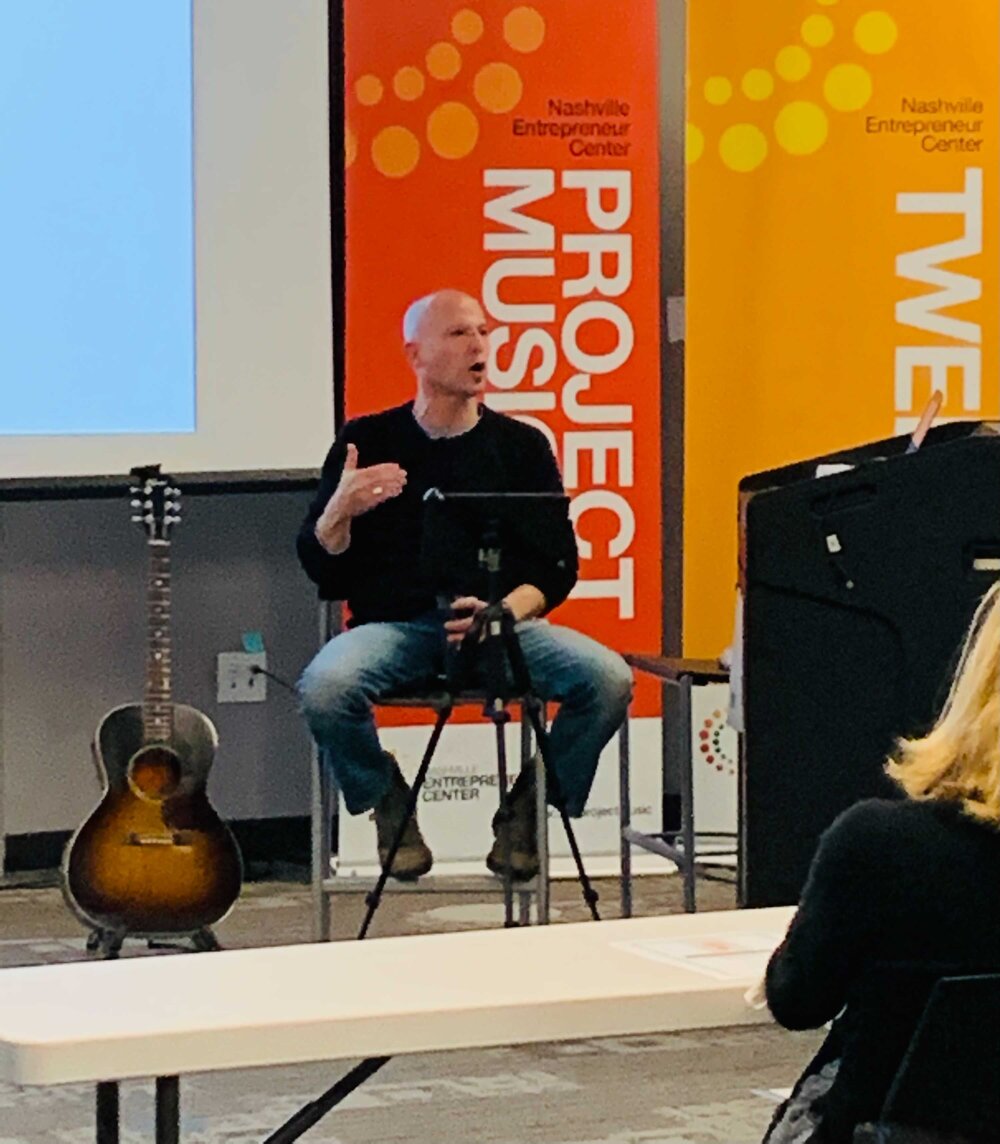 “People tend to think of themselves as not being creatives. But I don’t buy that.”

GRAMMY-recognized, #1 hit songwriter and author of The Reason for the Rhymes, Cliff Goldmacher is a master of the creative process.

Over the course of his 25-year music industry career, he’s written with artists like Keb’ Mo’, Ke$ha, Lisa Loeb, Chris Barron (Lead singer of the Spin Doctors) and Grateful Dead drummer, Mickey Hart. His music has been used on NPR’s “This American Life” and in national advertising campaigns. His client list includes household names like Deloitte, Google, Pfizer and Southwest Airlines.

But recently, he’s found ways to bring the power of songwriting to others.

This morning, Goldmacher joined the EC community for an exclusive one-hour workshop, where he used songwriting to unlock the audience’s corporate creativity and tell a story about something we’re all familiar with: remote work.

“Innovation does not take place in a vacuum, in order to succeed it needs to reach the people who can best make it happen. It’s like a song that never gets heard. Songs are designed to be shared,” he said.

“In songs, the part that will best improve your collaborative skills is co-writing. Each of the component parts of storytelling requires different skills. When those skills are shared among songwriter collaborators, it makes the song better than each of its individual contributors,” he said.

Together with more than fifty community members over Zoom and in person, Goldmacher wrote and performed an original country song about remote work based on the suggestions of the audience. It went a little something like this:

No Matter the Cost, by the EC Community and Cliff Goldmacher

By the light of the moon, I hear the hoot of an owl,

Over the sound of the leaves, I hear a faint growl,

Some time I’ll escape, but it’s not today.

But where there’s a path, there’s still some hope

If you can’t cross the creek, I’ll throw you a rope

Where are my teammates, are we all lost?

We will survive no matter the cost

He’s taught songwriting and music business workshops for BMI, The Songwriter’s Guild of America, and many more, inspired others with his TEDX talks, and used this method at The Reason for the Rhymes workshops for many companies struggling with inter-office issues.

The key, he says, is to get people out of their comfort zone when thinking and communicating about these topics.

“In all sincerity, that is what makes this work. I’m taking people who are used to being in total control and taking them out of their comfort zone,” he said. “The idea is that this is supposed to scare you a little bit, it’s supposed to make you uncomfortable. Because that’s how you’ll remember what we did here today.”

And perhaps more than that, it’s also unlocking something within the audience themselves – a new perspective on something they never thought they’d be able to do.

“Writing a song seems like a magic trick. The intention is to show smart people who don’t see themselves as creative, that you can break this down into small pieces and it’s possible.”