S1:E2: Navigating and Transforming The World of Venture Capital for Minorities with Monique Villa 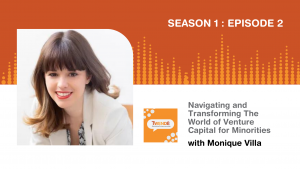 “The data exists” to show that investing in BIPOC (Black, Indigenous, People of Color) founders pays off, says Monique Villa, co-founder of Build In SE and early-stage investor at Mucker Capital. Originally from Los Angeles, California, Villa organically found her way to Nashville and into the VC world. Today, she’s paying it forward by starting a project called Unprocess that focuses on how pathing a way to a career is more organic and less linear. She joins Brynn in this episode to help explain how venture capital works and how it’s changing for the better to support BIPOC.

Highlighting the enterprising successes of Black and LatinX founders, the brand new Twende: Rethinking Entrepreneurship podcast is helping change the narrative of what’s possible for aspiring entrepreneurs of color.

In the second episode of the show, host Brynn Plummer is joined by Monique Villa, co-founder of Build In SE and early-stage investor at Mucker Capital.

Gaining her first glimpse into the world of startup enterprises in college by interning at the shoe company TOMS, Villa was instantly hooked on the feeling of creating something out of nothing.

Witnessing the rise of Los Angeles as a growing tech ecosystem, Villa describes LA tech industry back then as “the weird step cousin,” overshadowed by the prevailing world of entertainment. Nevertheless, tech and venture found their seat at the table in a major way, just like Villa.

Coming from a biracial background with degrees from state schools, it wasn’t easy for her to find her footing in venture capital, traditionally dominated by Ivy League graduates and MBAs. Despite the obstacles faced, she shares how data-driven strides focusing on underrepresented groups in funding roles give her hope for the future.

The World of Venture Capital

“It really comes down to numbers. How many funds are there? How many firms have diverse representation at the partnership level or below? How many of those funds are representing diverse LPs and their limited partners themselves as a fund? How many founders are they talking to in a given calendar year who are diverse in one or more of those ways?” she asks.

“There’s a lot of data that’s starting to surface for the very first time and I think we’re at the jumping off point of something that’s going to be truly transformative in the coming decades.”

Most significant is the research found about the power of having diversity in investment teams as a pivotal symbiotic asset for any venture.

Villa explains that “if you have an underrepresented investor on an investment team, their commitments to companies are with organizations that are led by underrepresented founders and CEOs at a much higher rate than non-diverse investors.”

In essence, diverse investors attract diverse founders, and going about cultivating this pipeline of diversity is just as simple. “The answer is you just exist,” she says.

Being open to diversity shouldn’t be a game of ratios, but of organic connection and genuine merit. More importantly, she adds, is staying true to the needs of the user, which means bringing people on who can understand the consumer.

Because of the demographic that takes up the majority of investors, many are not able to understand the perceived “niche needs” of underrepresented groups.

There’s added pressure on the backs of underrepresented founders to succeed because they are the trailblazers for the rest of their minority group, she says.

The solution? Give these entrepreneurial newcomers the freedom to fail.

“We need to be able to say, ‘You get the chance to raise a $2 million seed round’ rather than fighting for scraps for $250,000 and still being expected to compete in the market. You need to be able to fail with that 2 million and then have great relationships with your investors anyway.”

Hoping to equip aspiring venture capitalists, Villa discusses the tool she’s building to help entrepreneurs, particularly ones based outside of Silicon Valley.

“‘Unprocess’ is really about how talent finds their way or feels their way through their career in their professional journey.”

Noticing the inefficiencies, or “unprocessed” nature of hiring, her writing seeks to offer a “counter narrative around how to build your career.”

“For a bunch of newcomers that are early on in their careers, they’re talking about wanting to be in venture capital, but at the same time, there are so many other things that could actually be a better fit for them. It could be taking an entry level position at a startup, it could be going into sales, and just dialing for dollars and learning those skills. Mine was having to go through a 6000 person database 30 hours a week for I forget how many months,” she explains.

“That’s really how I learned who the players were when I had zero network, and those are the types of things that I’d love to be able to introduce and to be able to connect people with their next big thing.”