S1:E1: Getting Something Done that Matters with Henry Beecher Hicks 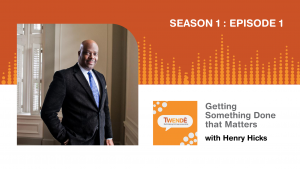 Henry Beecher Hicks, president and CEO of the National Museum of African American Music, sits down with Brynn Plummer to share about his early professional career and how a decision to buy Gray Line, a premium sight-seeing tour bus and public transportation company, led him to Nashville. He also shares the many lessons he has learned as an African American man navigating the world of entrepreneurship.

Life Leading Up to Gray Line

From Washington D.C., Henry comes from a family of five. His father, a Baptist minister and his mother, an elementary school teacher, he also is the oldest of three with a younger brother and sister. Growing up, their family listened to music frequently – especially Gospel music, but there was a large variety of music playing in their home. “I think (my father) saw God in all of it,” remarks Hicks. Hicks attended Morehouse College for his undergraduate degree where he also met his wife. He remarks that while he didn’t have the focus on his studies that he would later in life, he “took the lesson away that I can do anything I set my mind to.”

After Morehouse, Hicks took a job in sales and excelled but made his way back to school to get his graduate degree at the University of North Carolina at Chapel Hill. This experience was very different from the HBCU he attended for his undergraduate degree. He was in a fellowship and took his courses more seriously. His motto: “Learn everything you can.” He found himself in a process of learning to work and trust non African Americans as there’s more work than one can do alone and the only way you can get this done is to work with your classmates. This resulted in lifelong friendships and a better way of becoming a professional in America.

After his graduate studies, Hicks got into consulting and later investment banking. He even built the first financial model for what would later become Sirius FM Radio. He took a fellowship to work in the White House for one year, but later found himself back in banking to focus on POC and women. He spent many years consulting and managing a large portfolio of businesses. However, Hicks always had a long term strategy and goal of buying a company. Alongside a partner, he bought Gray Line in Tennessee in 2009. While he successfully operated Gray Line for many years, he eventually sold the business and realized he wanted to do something with more purpose and give back to his community.

Hicks had served on the board of the National Museum of African American Music for many years before it was even built. He had the knowledge and the passion for the mission and purpose of the organization. When he sold Gray Line, it became a natural transition for him to move forward as the President and CEO of the museum. “I thought it would be easier, but it’s one of the most difficult things I’ve ever done,” he shares.

Hicks was discovering a deeper purpose and a desire to do something that mattered. From board chair to CEO, he didn’t want to let anyone down, including the community. As he got deeper into the work, his passion grew and he was ready to deliver a museum to the city, to the community and to his family. While he is honored to be a part of this organization, Hicks mentions, “I didn’t do it alone.”